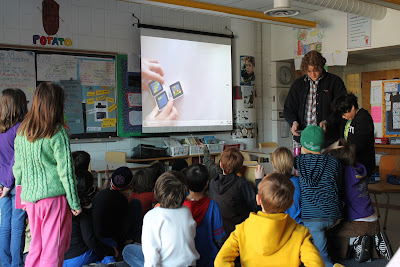 A couple of weeks ago, our class three Sifteo cubes. What Sifteo cubes are, are these little computers that you can program to play games with and you can also make some new games on them. Our class is really happy to have them and we've used them a lot to make our presentations for Math and just for the fun of it. There's two type of games that you can make with Sifteo cubes. One of them's a multiple choice game and the other one is a put things in order game. It also comes with three or four games that they've designed. One of them is called "Mount Brainaic", the other one, I don't remember what it's called, but what you do is you try to make a path for this little person to find his hat! Which looks a lot like a pylon. There's a third one which is a game where you have to turn the cubes around and you have to match the colours so that they disappear. It reminds me of a Cool Math for Kids game which is one of my favourites, so I think I will really like playing that. I hope you have fun playing with the Sifteo cubes!

-by Laryssa
Posted by Shauna Pollock at 08:31