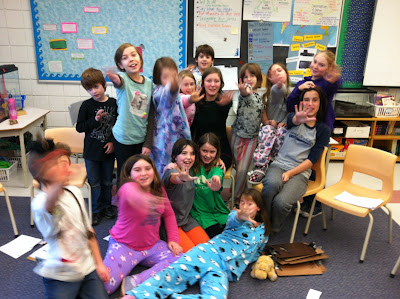 For one of the Art Electives this year, we did a Poetry Slam with Shauna. She's really good at poetry, and we had one of her former students come in. Her name is Hannah. There were mostly girls, and only three boys! Since Electives was on the same day as Pajama Day, we were all in our pajamas except the few people who decided not to celebrate pajama day. 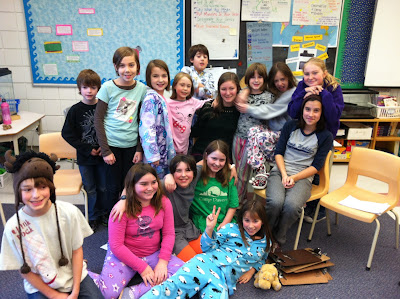 How we did our Poetry Slam, was everyone thought up a word and then wrote it on a piece of paper and we put it in a bin then we passed it around the circle and then we each took out a piece of paper. Surprisingly, I picked the same word that I put in the box, "sheep". I chose sheep because I was thinking of sheep a lot that day because my pajamas were covered in sheep. If you're wondering, those things covering my pajamas are not clouds!

At the end, when we were really running out of time, we could stand up and read the poem we were currently holding. I was holding a poem called, "People". Clara is really shy and she decided not to read hers. We had to stop halfway, at Shauna, so Shauna did not get to perform "Sheep". I have a very good memory. I was very mad we had to stop there cause I wanted to hear what my poem ended up as.

At the end of the Elective, Bella and her friend volunteered to type up all the poems and email them to Shauan. After the winter holidays, everyone who was in the elective got a copy of the book. The cover was a Wordle of all the names of the people who were in the Poetry Slam and the word "Poetry Slam". We also got to keep four for the class because we had extras!

My favourite poem is "Sheep". It's not just because it was my poem, it's mostly because I like how the words went together and the ideas changed and it's still smooth!