We Stand Together Daily Fact #2 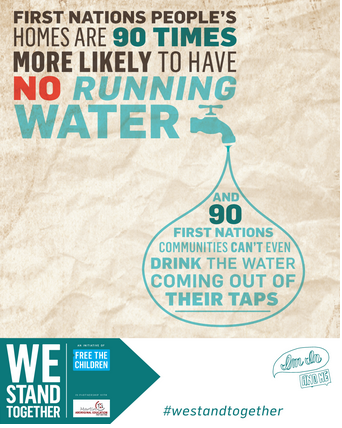 Daily Fact #2
Compared to other Canadians, First Nations People’s homes are 90 times more likely to be without running water, and currently 90 First Nations communities cannot drink the water that comes out of their taps.

Water issues in First Nations communities
Access to clean water is usually considered  a problem present only in developing countries, but for some families in Canada, this is a very real issue. Lack of proper infrastructure in First Nations communities has resulted in conditions usually seen only in developing communities. More than 3,000 homes on reserves across Canada lack running water. Two out of five of these homes are in Manitoba. In the Island Lake area of Manitoba, some Aboriginal families subsist on 10 litres of treated water a day per person, plus another 20 litres of untreated river water for laundry. The United Nations considers 50 litres per person the minimum to meet basic needs!
Even when Aboriginal communities have access to running water, it may not be clean enough to drink. Of the more than 600 First Nations communities south of 60 degrees parallel, 90 had a drinking water advisory as of December 31, 2013.
Posted by Shauna Pollock at 16:55

Email ThisBlogThis!Share to TwitterShare to FacebookShare to Pinterest
Labels: aboriginal, daily fact, Free the Children, We Stand Together