We Stand Together Daily Fact #1

Free the Children is hosting a conversation from Feb 24th-March 7th to raise awareness about aboriginal issues. 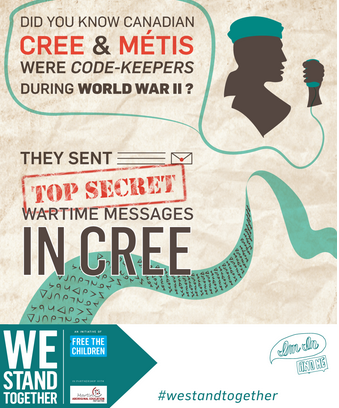 Daily Fact #1
Canadian Cree and Métis served as code-keepers for the Allies’ top-secret transmissions during the Second World War, sending and translating messages into Cree and then back into English.
Aboriginal Canadians During the World Wars
First Nations, Inuit and Métis all have a long history of standing beside non-Aboriginals to defend Canada in times of conflict. In fact, despite facing discrimination, one in three First Nations men of military age volunteered during the First World War, serving as soldiers, snipers, sappers and scouts on battlefields across Europe. The war brought together men from First Nations across Canada. Some of the first Aboriginal political organizations formed during this time of Aboriginal pride and solidarity.
When the Second World War broke out, Canada’s Aboriginal population again prepared to fight. At least 3,000 status Indians volunteered (likely many more), and a small number of these soldiers were recruited for a special American initiative. Along with American Navajo, these men became responsible for coding the Allies’ most important messages into the Cree language. The efforts of the Navajo are recounted in the 2002 film Windtalkers, starring Canadian Aboriginal actor Adam Beach from the Saulteaux Nation.
For decades after their service, the experiences of the code-talkers were classified and they could not even speak to their families about their service in the war. The Canadian Aboriginal code-talkers never received recognition, either from the American or Canadian government, for their contributions to the Allies.

Email ThisBlogThis!Share to TwitterShare to FacebookShare to Pinterest
Labels: aboriginal, daily fact, Free the Children, We Stand Together