In class, we read spoke and read about one of the most well known artists of all-time, Pablo Picasso. We were surprised to learn many things about him and enjoyed learning more about the man behind the famous art.

As Shauna read aloud from "Lives of the Artists: Messes, Masterpieces and What the Neighbours Thought", students listened and then took turns summarizing paragraphs. You can read below to see what we learned! 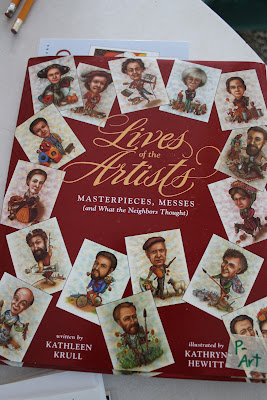 We already know:
-abstract artist – not realistic
-blue period
-there are some original Picasso paintings in
-knew how to do abstract and portraits, not many artists know how to do that
-from –
-he did a lot of different types of art: ceramics, sketches, paintings, sculpture

We learned together:
-he didn’t do well in school, he had dyslexia
-he brought a pigeon to school and drew it
-he was pretty successful in at a young age
-he lived in an attic in , was robbed for everything but paintings
-whenever he had enough money, he went to the bullfights, because he liked that as a child
-he was extremely productive, a workaholic
-he was pretty small, but buff
-he’s crazy, he went crazy around people, he was a show off
-he had lots of important friends, but he was very violent and they were afraid of him!
-he dated a lot of ladies and a neighbor threw a rock at a window
-he only let one person watch him paint, his second and last wife
-he had four children and had a good relationship when they were younger, when they were older, he didn’t have interest in them
-he had some weird habits: he didn’t throw anything out, he didn’t let anyone dust his studio and he safety pinned his wallet to his vest pocket
-he was paranoid about his security
-he didn’t have a phone until his son had a medical emergency
-he had a strict and sort of strange diet
-eccentric:  different from other people, liked to keep lots of animals
-really big show-off, vain: liked books and movies about himself
-prolific: he made 200 paintings at the age of 90
-source: "Lives of the Artists" - Krull

We learned on our own:
-Picasso's dad painted in the realistic style, he saw his son's paintings and quit painting because Pablo was better! - Pat
Posted by Shauna Pollock at 10:40